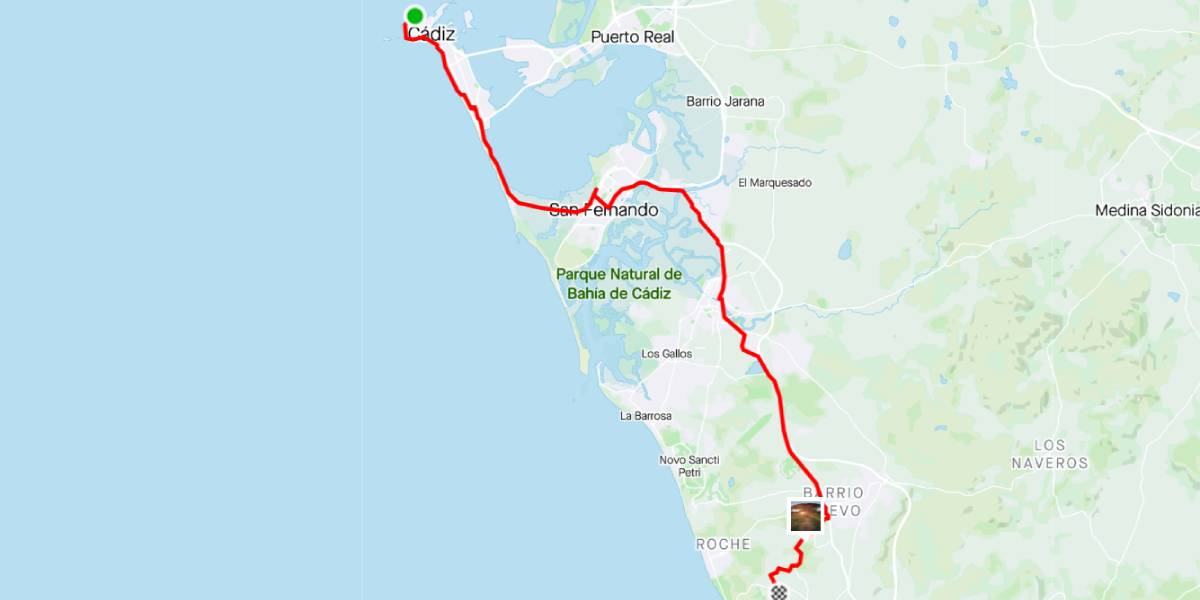 Now, there’s just the small matter of running a marathon to bring this challenge to an end.

My plan coming into this final week of training was to just keep my legs ticking over, while concentrating on upping my pace a touch to get more comfortable at the pace I need/hope to run.

In terms of running, I did three runs (two 5ks and one 7k), totalling 17km. This was a bit shorter than I’d planned (20km), but I was really paranoid about picking up a last minute injury, so I reduced my 10k down to a 7k. These runs have all been a bit faster than usual in order to give myself a final cardio bump.

On Boxing Day, I also tested out my planned route by cycling it to check it was all suitable. Luckily, it was. Although it also made me appreciate how far 42km/26 miles is.

For the marathon, I’ll be running from the tip of Cadiz (the oldest city in Spain) back to my hometown of Conil. I was trying to figure out a route for a long time and I was pretty pleased when I discovered that this route was bang on marathon distance – most of which is pretty flat.

The biggest challenge this week, though, wasn’t running – it was making sure I didn’t go too mad on the endless supply of good Christmas scran.

But It could have been a lot worse. I clearly overindulged on Christmas Eve/Day and I weighed in on Boxing Day at 75.6kg – basically the weight I was at after the first week of training.

That meant I’ve had to really be on point with my consumption in the past three days to bring down this weight again quickly.

I’m drinking as much water as possible and carb loading for the final two days, so I’m not too sure what that will do to my final weight – but what’s most important now is making sure my glycogen stores are high and I’ll be full of energy on marathon day.

I really couldn’t be happier with how my training runs have gone. I was certain I was going to pick up an injury or something, so to have a month of training without any major niggles is a big mental boost. Also to have two half marathons in the bank also provides me with some extra confidence.

But, obviously, getting through training isn’t the hard bit – trying to run a marathon in under 3 hours and 30 minutes is.

I set this target at the start of 2020, with the hope of reaching this with a full training camp of at least three to six months. And, to be frank, I don’t fancy my chances of reaching this time goal at all – neither of my half marathons have been on this pace, so I don’t see myself being able to significantly raise the pace for twice the distance.

If I can complete this marathon in under four hours, I’ll be happy. But hopefully I can skim off as much time as possible off that. If I get even close to 3:30 (although not so close it’s infuriating like 3:31 or something), I’ll be buzzing.

There is, though, one thing I’m thinking of more than the marathon itself… and that is the post-Marathon feast!

I’ve got it planned out already. I’m ordering the biggest, greasiest pizza I can find so that it arrives at exactly 4pm, washed down with my beloved Franziskaner weissbier. After that? I’ll probably pass out in a marathon/pizza/beer haze and miss the New Year coming in.