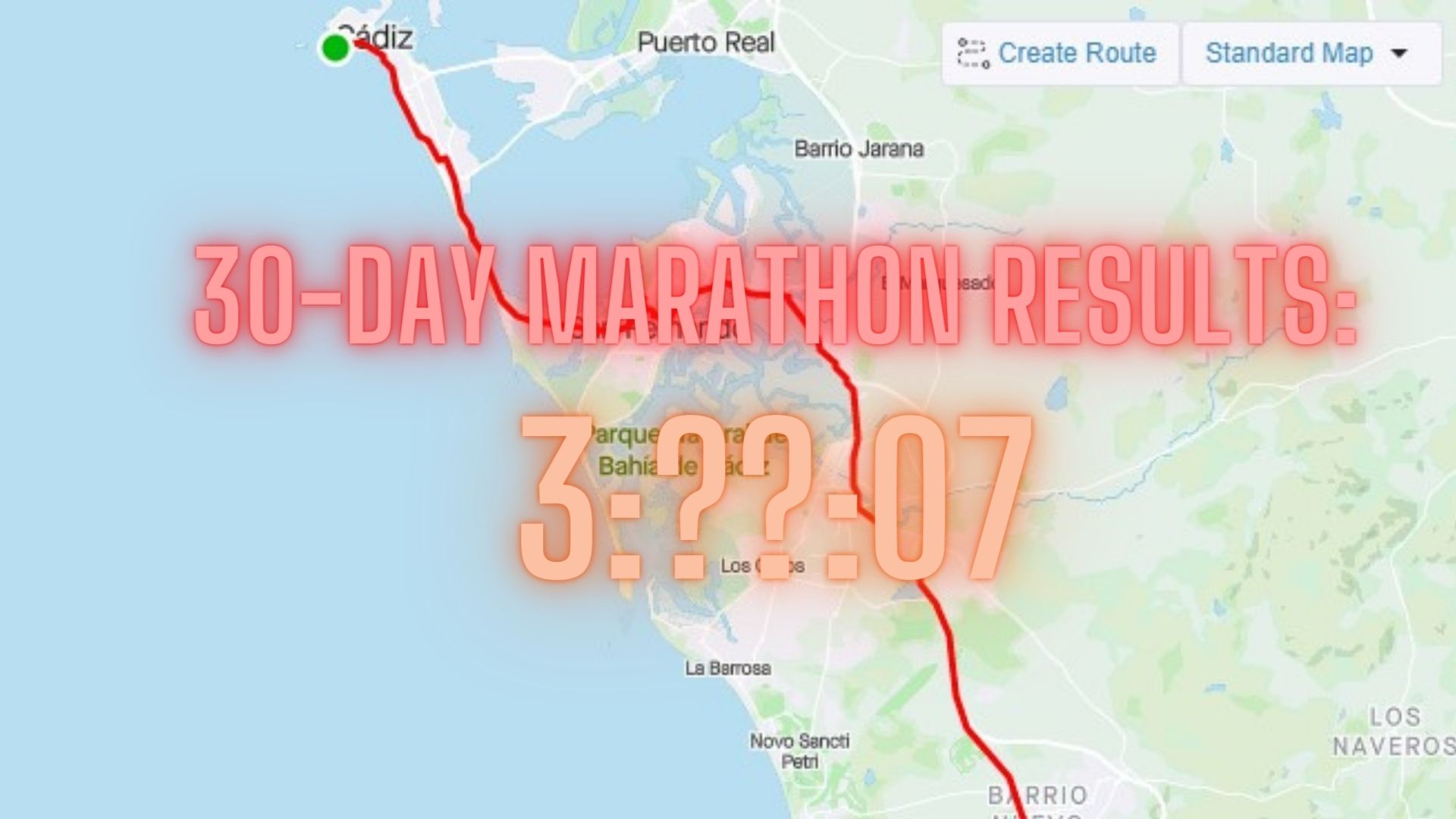 On 1st December 2020, I decided that I wanted to try to run a marathon in under 3 hours and 30 minutes before the end of the year. That meant I had just 30 days of training.

Fortunately my training camp went well and on 31st December, I stood in Cadiz – injury-free – prepared to run 42.2 kilometres.

I did complete the marathon, though, and in a time of 3:51:09. I think it was the hardest thing I ever did.

The first half of the race went great. My plan was to follow the 10/10/10 strategy, meaning the first 10 miles I’d run comfortably at just under my target pace, before kicking up a gear for the next 10 miles, and hopefully finishing with a passionate flurrry for the final 10k.

I reached the half way point in good time (1:46:07), just 1 minute behind my goal time of 1:45. And for another 5k or so, I felt fine. But at 27k, everything got difficult. My legs became heavy, my joints were seizing up, my energy level had dipped significantly. I tried some self-talk to stay on track and grind it out and it worked… for a while.

But after trying to get my engine going again, by 32k I was just spent. I was in pain. The time goal went out the window – I just had to find a way to keep going and complete this ridiculous marathon. The next 8k was nothing but torture. Every step hurt and my dropped from around 5:00 per km to around 7:00 per km.

Despite not getting close to my goal time, I was proud that I managed to keep going. And, with 2km left to go, I gave everything I had to pick up the pace one last time, but ultimately the goal time had long gone.

What Would I Do Differently?

Given the short amount of time I had to train for this marathon, there’s no drastic changes I would make to my training plan.

The one thing I would change though, would have been to add in one much longer run to my training. I ran mostly from 5k to 10k for my training runs, plus two half marathons.

Come marathon day, my body was prepared for a half marathon and it had a bit left in the tank to push it to 25-27km. But beyond that, my body had never had to deal with that kind of fatigue and endurance before.

So, if I were to do the same challenge again, I would have tried to increase my second half marathon training run and pushed for a 30k or so practice run – even if that meant slowing right down. It would just have helped to get my body used to that extra distance come the big day.

It was horrible. It really was. But that 3:30 goal is still in my head, while my original entry for the Rotterdam Marathon has been pushed back to October 2021. So, despite the pain, I think I’ll go through it again (but with a proper training camp!) to see if I can break my 3:30 goal in 2021.

Thanks to everyone who’s followed this challenge and for the messages of support – it meant alot.